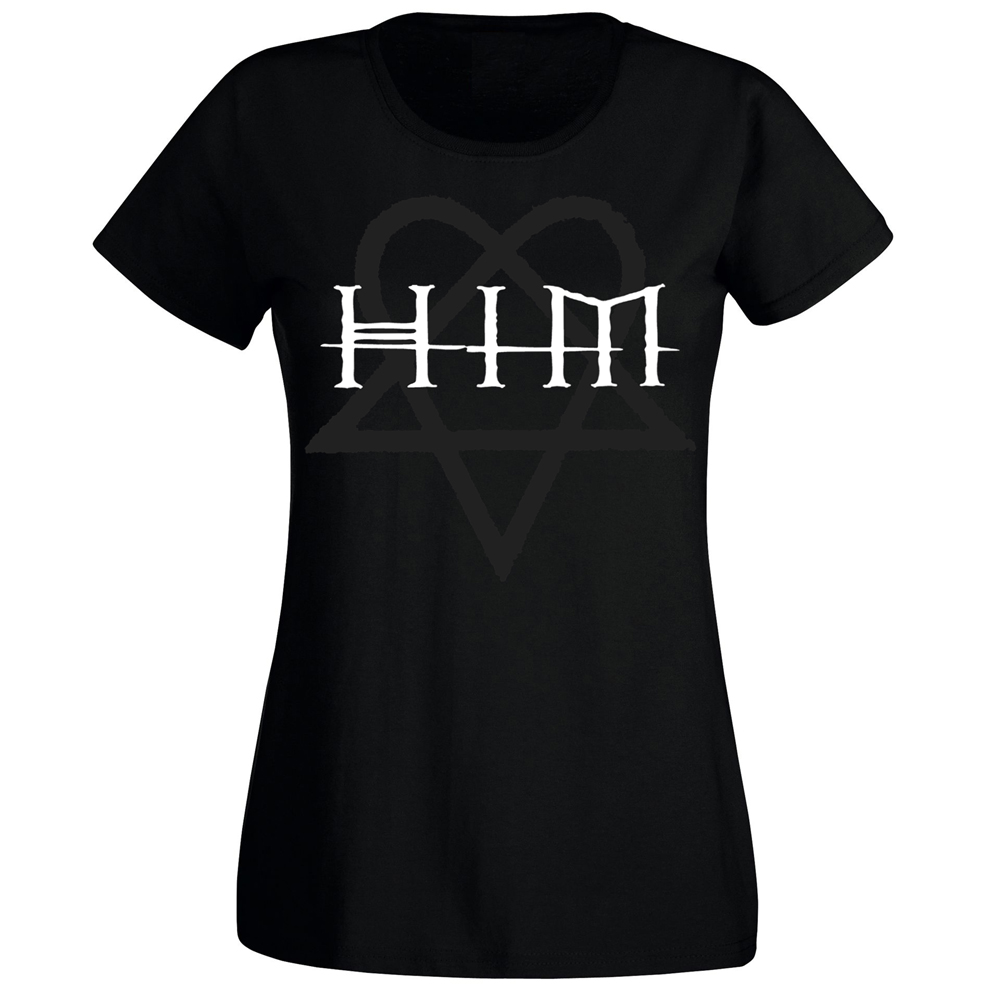 HIM originally was referred to as His Infernal Majesty but due to false accusations of satanism and the fact that people in Finland were having a hard time pronouncing it, they shortened the name to HIM. 666 Ways to Love: Prologue was released in 1996 solely in Finland, and only 1,000 copies of this album were sold. This makes it very rare for HIM collectors and fans. Recently an almost mint condition copy of the bands EP was listed on eBay for around $600. The lady on the cover is said to be Valo's mother, who (according to an interview with Valo) worked in a shoe shop at the time. It was produced by Hiili Hiilesmaa, and was recorded at Finnvox Studios, MD and Peacemakers, Helsinki.

The band released their first full-length studio album, Greatest Love Songs Vol. 666, on November 20, 1997. It features covers of Chris Isaak's "Wicked Game" and Blue Öyster Cult's "(Don't Fear) The Reaper". Four singles were released from the album which was also produced by Hiili Hiilesmaa. Like the EP 666 Ways to Love: Prologue, the album was recorded at Finnvox, MD and Peacemakers in Helsinki, Finland. Guest vocals were provided by Sanna-June Hyde and Asta Hannula on "(Don't Fear) The Reaper" and "For You", respectively. A special digipak version was also released with "For You" moved to the first track. Another special edition was released in Germany with the bonus track "Stigmata Diaboli", taken from 666 Ways to Love: Prologue. In keeping with the theme of 666, the album's length is 66:06 and contains a total of 66 tracks (56 of which are blank). There is another track which starts at 6 minutes into the 66th track, it is the outtro of "The Heartless" from 666 Ways to Love: Prologue. The track is called "HIM 666," or alternatively "666" or "Dark Circle." This album is also the only HIM album so far to have hidden bonus tracks. Although sometimes perceived to have Satan-worshiping references, Valo has stated that the album was not to be perceived as such.

Rise to Fame (1999-2001)
After gaining popularity in Europe, particularly in their homeland, HIM released its second album in 1999, titled Razorblade Romance. This is when the band's popularity began to rise, their single "Join Me in Death" from the album reached #1 on the German music charts, selling over 500,000 of this single in two months.

HIM at Provinssirock 1999: from left to right, Mige, Ville, Gas, Juska and LindeAlso on the first runs of the VHS release of the CKY videos (not to be confused with the Jackass series) Bam Margera first began promoting for HIM and their videos and small clips are seen with the band and Ville. Following this German success they released two more Germany only singles from this album; "Right Here in My Arms" and "Gone With the Sin", which reached #20 and #19 on the charts respectively. Around this time they were also becoming more well known in other parts of Europe, such as the United Kingdom. The album itself reached #1 in both Germany and their native Finland.

In 2002, Razorblade Romance was re-released and put into stores in the United States. HIM was not allowed to use their name for sales because of the American band, HiM, owned the rights to that name. Therefore, they changed the name to HER in the United States. Eventually, they were able to buy the full rights to the name HIM, and copies of the album began to be manufactured with their desired name on the packaging. Only 1,000 copies of the album exist with the HER band name, which makes it a rare collectible among fans.

The original working title for Razorblade Romance was in fact Slippery When Dead, and a demo or properly recorded song from this session leaked onto the internet (in the midst of 2004), titled "Too Happy To Be Alive". Some fans say this can be compared to another song of HIM's which is on Razorblade Romance, "Death Is In Love With Us". A drum machine was used for this particular session due to Patka leaving the band.

Daniel Lioneye and Deep Shadows (2001-2003)
During 2001, before the group's third release, the members of HIM formed a new band, Daniel Lioneye, it was aimed to be a solo project of guitarist Linde, who took on the vocal spot and the stage name Daniel Lioneye for it.

The style of music played on the album falls between bluesy-hard rock, with sleaze rock themes such as sex, alcohol and rock 'n' roll, very different from the romantic lyrics of HIM. Migé Amour played bass, Ville Valo was on drums, with Hiili on keyboards, and Ike on sound effects. They released one album, The King of Rock'n Roll, in September 2001, and have only performed together for four shows. Although it was not a commercial success, it retains a cult following.

After the Daniel Lioneye project, HIM released Deep Shadows and Brilliant Highlights in August 2001. This was the band's first album with new keyboardist Burton Emmerson, the final addition to the current line-up. Once again the album shot to #1 in their Finnish homeland, making them the most dominant homegrown band in their country since Hanoi Rocks in the 1980s. It also reached #2 in Germany. Three singles were released from it: "Pretending" (which reached #10 in Germany), "In Joy and Sorrow" and a double single featuring both "Heartache Every Moment" and "Close to the Flame." Such success further facilitated their gradual emergence into the mainstream.

Love Metal and Greatest Hits (2003-2005)
On April 14, 2003, HIM released Love Metal. This was the first album that did not feature singer/songwriter Ville Valo on the cover. Instead, it featured a gold heartagram, the band's well-known logo. "The Funeral of Hearts" was the first single and their first high appearance on the United Kingdom charts at #14, it also hit #3 in Germany. It was followed by "Buried Alive By Love" and "The Sacrament". (The Sacrament was recently used as the ending for the anime film Highlander: The Search for Vengeance.)

Around the time of the Love Metal album, the group became more well-known in the US and internationally when professional skateboarder and TV personality Bam Margera began using the band's heartagram logo and promoting them extensively on his MTV series Viva La Bam. Margera produced their video for "Buried Alive By Love", which featured a guest appearance from Natural Born Killers actress Juliette Lewis. They played at Download Festival in 2003 on the second stage with The Hellacopters; the following year they would go on to headline the same stage.

And Love Said No: The Greatest Hits 1997-2004 is HIM's first greatest hits album. It contains two unreleased songs: "And Love Said No" and "Solitary Man", the latter of which is a Neil Diamond cover. It also had a rerecorded version of "When Love and Death Embrace" and the British version also had a rerecorded version of "It's All Tears (Drown In This Love)". The digipak version of this album came with a DVD with six songs live at Semifinal Club in Helsinki.

HIM performing live in 2005.HIM's fifth studio album, 2005's Dark Light, became the band's full breakthrough in the US, debuting in the top 20 of the Billboard Top 200 and spawning two major rock hits, "Wings of a Butterfly" and "Killing Loneliness", both of which have accompanying videos. In the summer of 2005 they played the mainstage of Download Festival with Black Sabbath and Velvet Revolver.

The success of Dark Light has also allowed a number of HIM's previous albums (including Love Metal) to chart in the United States. In October 2006, the band's official website announced that Dark Light had been certified Gold in the U.S. by the RIAA. This made HIM the first band from Finland to sell over 500,000 records in the US.

Some time during their tour to promote Dark Light, Mige and Burton wrote a song together called "Plasma Mullet" that is completely different from their other work and is not on any official release of the band. The only time it has been released to the public is when it was played on skateboarder Bam Margera's half-hour radio show on Sirius Satellite Radio or at various concerts after their performance. Margera refers to it as their "jokey song".

Uneasy Listening Vol. 1 was released in 2006 on October 27 in Germany, October 30 in the United Kingdom and November 14 in the United States. The compilation contains fifteen alternate versions of HIM's lighter songs such as "In Joy and Sorrow," "The Sacrament," "Gone With the Sin," and "One Last Time." An acoustic version of "Pretending" can be found on the single for the string version of "In Joy and Sorrow."

Uneasy Listening Vol. 2 was released in 2007 on April 20 in Germany, April 24 and April 25 in the rest of Europe, May 22 in the United States and May 25 in Australia. It contains fourteen rare alternate tracks, which exemplify HIM's heavier side. These include the Black Sabbath cover "Hand of Doom," a remix of "Sigillum Diaboli," a live version of "Right Here in My Arms," and a remix of their Turbonegro cover of "Rendezvous With Anus." It also contains the much sought after version of "Buried Alive By Love" which only originally appeared on the CKY4: The Latest and The Greatest DVD.

Venus Doom was released on September 14, 2007 in Finland, Ireland and Germany, September 17, 2007 internationally and September 18, 2007 in the US. It is said to be the band's heaviest material to date. At the Give It a Name Festival '07, HIM played one of the new songs, "Dead Lovers' Lane." In an interview with The Gauntlet, Ville stated that the longest song on the album is 10:05 ("Sleepwalking Past Hope") while the shortest song is 1:11 ("Song or Suicide"). Venus Doom is mostly guitar-oriented with a pronounced lack of keyboards. The song "Passion's Killing Floor" is on the Transformers soundtrack. The first single was "The Kiss of Dawn", which the band had already performed during several 2007 tour dates, and the video can be found on iTunes. The video for "The Kiss of Dawn" debuted in the UK on Scuzz TV on August 10, 2007. The next single off of Venus Doom, was Bleed Well, a rock song which featured a video of the band performing with some fans on stage, somewhat similar to the second Killing Loneliness video. Venus Doom is nominated for a Grammy for Best Boxed or Special Limited Edition Package.