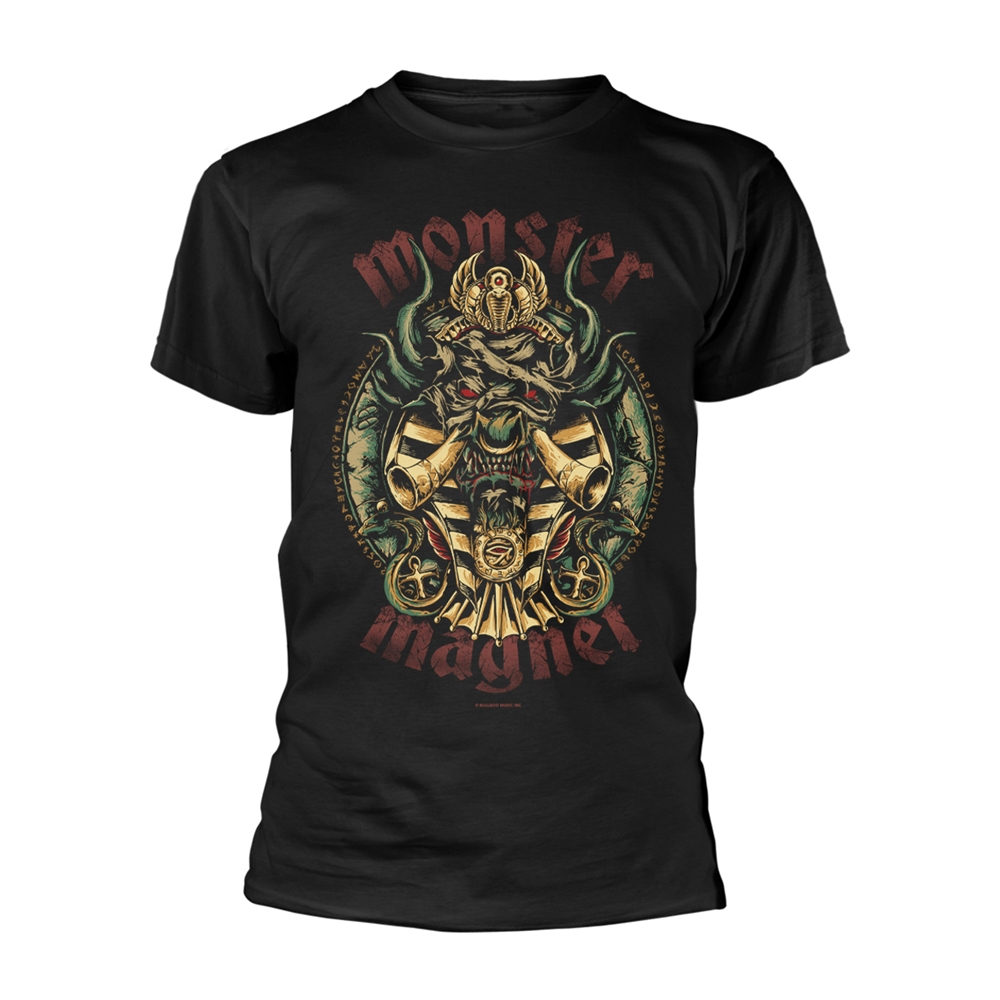 Retro-rock visionaries Monster Magnet spent much of the 1990s struggling against the prejudices imposed upon image and sound by alternative rock fashion nazis. In fact, it wasn't until that movement's late-'90s decline that the band's dogged persistence finally paid off, when their fourth album, Powertrip, catapulted to gold sales status on the strength of its massive hard rock hit, "Space Lord." In the meantime, Monster Magnet had managed to become one of the most successful and influential bands associated with the so-called underground "stoner rock" scene. And yet, their influences span much further than that scene's foundations in '70s hard rock and metal, delving into space rock, psychedelia, and beyond.

New Jersey native Dave Wyndorf was already a rock & roll veteran by the time he formed Monster Magnet in 1989, having cut his teeth with little-known punk band Shrapnel (also featuring future punk producer Daniel Rey on guitars) in the late '70s before retiring from music altogether. But, after teaching himself guitar, Wyndorf began assembling Monster Magnet with a handful of fellow New Jersey natives, vocalist Tim Cronin, guitarist John McBain, bassist Joe Callandra, and drummer Jon Kleiman. Fusing their metal, punk, space rock, and psychedelic influences, the band developed a sludgy, feedback-heavy hard rock sound that helped them stand out from the era's burgeoning retro-rock movement -- also counting the Black Crowes, White Zombie, and many others. After releasing a self-titled six-song EP through Germany's Glitterhouse Records, Wyndorf assumed all vocal responsibilities, while Cronin retreated to a behind the scenes "conceptual consultant" position -- much like that of John Sinclair for the MC5.

In the meantime, Monster Magnet had signed with independent label Caroline Records in 1992, and recorded their first full-length album: the very impressive, uniquely dark psychedelic masterpiece Spine of God. The productive sessions also yielded a number of extensive space rock jams that would later be issued as the Tab album in 1993. A video for first single "Medicine" and a support tour with the fast-rising Soundgarden also helped attract powerhouse A&M Records, but even as they prepared to sign with the label, Wyndorf had a serious falling-out with guitarist McBain, who was soon replaced by Ed Mundell. Despite the last-minute change, 1993's Superjudge proved to be a stellar major-label debut -- although it did see the band sacrificing some of their rampant feedback in exchange for more clearly defined, muscular metal riffs. Unfortunately, the group's retro-rock image had become highly unfashionable at the time, arriving at the height of the post-Nirvana alternative boom, and the album sold poorly. Under mounting pressure to deliver a more commercial follow-up, Monster Magnet delivered a decidedly sleeker -- though no less space rock-drenched -- effort in 1995's Dopes to Infinity. This yielded a Top Ten rock single in "Negasonic Teenage Warhead" and was supported by extensive touring with C.O.C., among others, but the album sold only slightly better than its predecessor.

Finding himself mentally and physically exhausted in the aftermath, Wyndorf exiled himself to Las Vegas to begin composing the tracks that would shape 1998's breakthrough release, Powertrip. By far the group's most straightforward hard rock album, Powertrip channeled all of Sin City's vice, greed, and sex into its hedonistic but surprisingly accessible tracks, and first single "Space Lord" went on to dominate rock radio that summer, driving the album over the gold sales plateau. With new rhythm guitarist Phil Caivano in tow, Monster Magnet then embarked on a marathon two-year world tour, both as a headliner and as support to the likes of Aerosmith, Metallica, and Megadeth. By the year 2000, the band had contributed the track "Silver Future" to the Heavy Metal 2000 soundtrack and completed work on their fifth album, God Says No, released in Europe in October. But their new American record label, Interscope (which had swallowed A&M in a hostile takeover the year before) inexplicably fussed and messed with the album before finally releasing it domestically in April 2001. Precious momentum and sales were therefore lost to an influx of import copies of God Says No -- according to most seasoned fans, already a "difficult," overtly commercial album to begin with -- and Monster Magnet soon found themselves rudely dropped.

Following this unforeseen setback, Wyndorf watched as various bandmembers pursued side projects. Ed Mundell recorded a number of well-received albums with his power trio the Atomic Bitchwax, while Tim Cronin and Jon Kleiman collaborated on the Ribeye Brothers and Gallery of Mites. But, Monster Magnet duly reunited for a short North American tour in early 2002 and, a year later, a new deal with the German SPV label was announced. Recorded in late 2003, the group's sixth full-length album, 2004's Monolithic Baby!, would be recorded with a new rhythm section, these being bassist Jim Baglino and drummer Bob Pantella. In 2005, Phil Caivano left the band amicably, and the rest of the group started recording in L.A. with producer Matt Hyde. Reissues of Tab and Spine of God were released in the meantime, along with a 20th Century Masters -- Millennium Collection disc of their greatest hits. In November 2007, after a European tour, 4-Way Diablo was released.