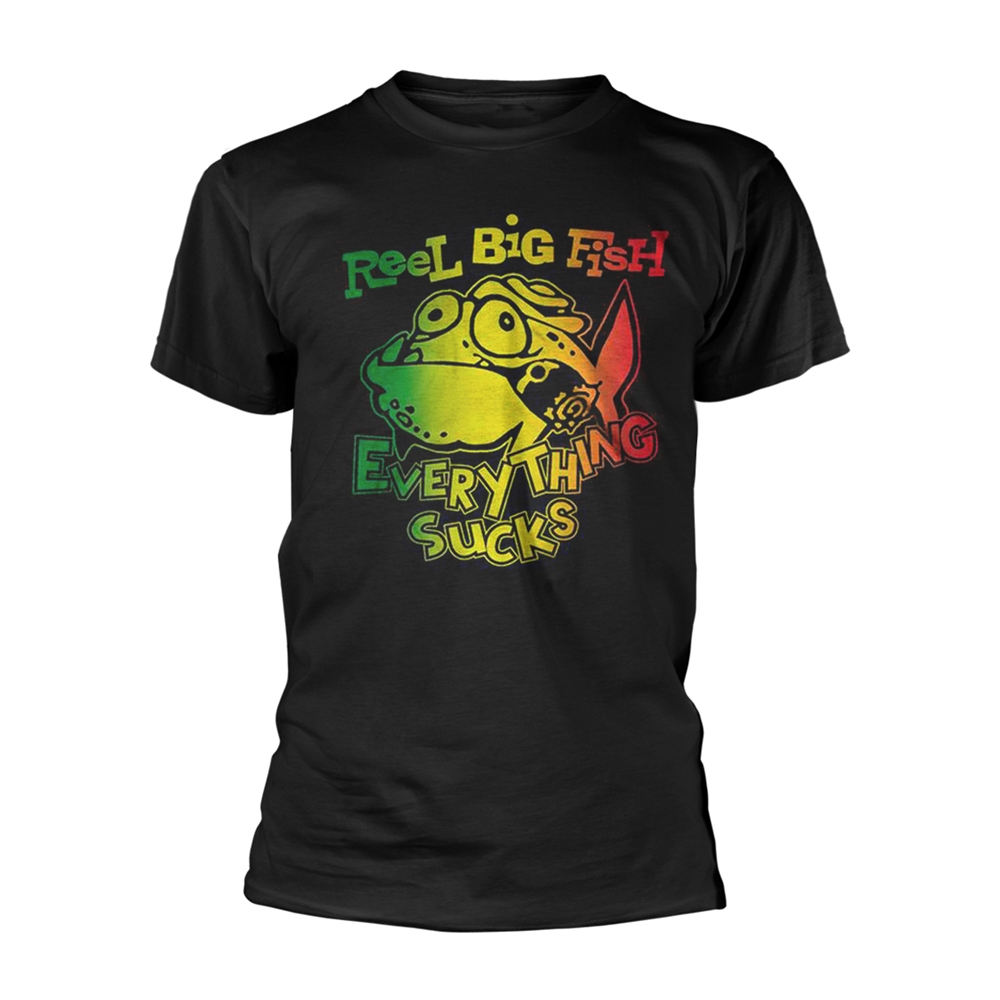 Reel Big Fish was one of the legions of Southern California ska-punk bands to edge into the mainstream following the commercial success of No Doubt and Sublime. Like most of their peers, the band was distinguished by their hyperkinetic stage shows, juvenile humor, ironic covers of new wave pop songs, and metallic shards of ska. The group cultivated an underground following that broke into the mainstream in summer 1997, when their single "Sell Out" became a modern rock radio and MTV favorite.

This new and final lineup of Reel Big Fish recorded their debut album, Everything Sucks, in 1995, and released it themselves. Everything Sucks became a word-of-mouth underground hit in ska-punk and college circles. Following its success, the band signed with the indie label Mojo Records. The label's president, Jay Rifkin, and former Oingo Boingo bassist John Avila co-produced Turn the Radio Off, Reel Big Fish's first album for Mojo. Turn the Radio Off was released in August 1996, and over the next year, the group continually toured in support of the album, expanding their fan base all the while. In spring 1997, the single "Sell Out" began receiving heavy airplay from several influential modern rock stations in the U.S., which soon translated into MTV support for the song's quirky video. By summer, the song had become a moderate modern rock hit, and the album had charted in the Top 100. In July 1997, Reel Big Fish released the Keep Your Receipt EP, which contained "Sell Out" and several outtakes, new songs, and live cuts. Why Do They Rock So Hard followed a year later, and in early 2000 the band returned with Everything Sucks.

The guys wound up on Jive in fall 2001 when their current label, Mojo, was bought by Jive's parent label, Zomba. Reel Big Fish's label debut, Cheer Up!, appeared in mid-2002. A supporting tour with the Starting Line and the Kicks as openers followed. Touring continued over the next few years with countless bands, including Sum 41, Catch 22, Lucky Boys Confusion, the Matches, Zebrahead, and more. Their installment of Kung Fu's DVD series, The Show Must Go Off, was recorded live at Anaheim's House of Blues in June 2003. The DVD was released by the end of the year, and the band's next album, the cynical yet catchy We're Not Happy 'Til You're Not Happy, was issued in April 2005. For the album, the group consisted of Barrett, Regan, Klopfenstein, Wong, new trumpeter John Christianson, and drummer Justin Ferreira; Ferreira was replaced by Ryland Steen in February 2005.

Touring continued for the rest of the year and through the next; Reel Big Fish happily parted ways with Jive in January 2006 (they'd been wanting to be dropped since Cheer Up!'s release). Ever on the road, they could be found that summer on a nationwide co-headlining tour with MxPx. The self-released double live CD and accompanying DVD set Our Live Album Is Better Than Your Live Album arrived that August. A few months later -- and much to the annoyance of the band -- Jive issued the best-of compilation Greatest Hit...and More. Reel Big Fish returned with some new material in February 2007 with the split EP Duet All Night Long alongside their friends in Zolof the Rock & Roll Destroyer.